Overwhelming. Unreal. Spellbound. Words keep tumbling out of my mouth, all meaning the same thing because as much as I kept on saying I want to catch all musicians I know and adore perform live when I start earning, it was always a thought never reality. But it was!

I had been talking about Slash and Kennedy + the Conspirators performing in India with my friends for almost 2 months now but the reality of me actually being there was just beyond my grasp. Reminded me of this quote in One Tree Hill.

Most of our life is a series of images that pass us by like towns on the highway. But sometimes a moment stuns us as it happens and we know that this instant is more than a fleeting image. We know that this moment, every part of it, will live on forever.

November 7,2015 was one of those moments. While some may wonder at a girl taking a train to Mumbai for a day and a horrible bus back, just for a concert, I’d disagree. For me, it was all worth it. In those 2 hours when Slash n Kennedy were performing, it was as if everything in my world had converged into that 2 hours of riffs and vocals; and everything in my world was making sense again. It was more than just music, it was a culture, a lifetime of listening to these musicians on my Ipod and now somehow in front of me.

You’ve seen it before. The famous guitarist goes solo and hires a bunch of goons to stand behind him while he stands awkwardly in the foreground, trying to be both guitarist and frontman while the singer croons timidly, relegated to the side of the stage.

And then there’s Slash.

While his name gets the top billing on the marquee, make no mistake; what you’ll get if you venture out to see Slash on his current “solo” tour is a full band experience: Myles Kennedy front-and-center belting out each and every note, Slash occupying stage left in that omnipresent way only he can and a backing band — the Conspirators — full of capable musicians intent on putting on a great rock show.

Soon after, Slash Featuring Myles Kennedy and the Conspirators  emerged, with the titular guitarist clad in his signature top hat, sunglasses, leather pants, and sneakers. Onstage, SMKC played a dynamic set, with lead singer Myles Kennedy as the emphatic orchestrator, urging the crowd to clap while bounding across the stage. And Slash made for the consummate performer, effortlessly weaving among his bandmates while showing off his guitar skills. Mid-song, Slash delivered a guitar solo that ran for about 15 minutes. Beads of sweat glistened on his muscular shoulders as he frantically moved across the frets, displaying his immense speed and technical skill.

Music at its best can be life-affirming. It can be healing. It can raise questions, and it can provide a sense of catharsis during some of our darkest moments.  SMKC delivered an impassioned show;tearing into the material in a way that makes you stop and give thanks.

Slash, known as a perfectionist, particularly when he’s making an album, and no doubt this intense attention to detail is an essential building block of his music, but watching his band live, you don’t look at the stage and see a control freak. You see someone channeling the music in a way that few others could ever approach, and the magnitude of it all necessarily makes everything else look minor by comparison.There’s something unchained about it all, as though his talent gives him the freedom to let the music run wild. It’s all perception, but genius has that way of erasing the middle steps between idea and execution, so that while the others are painting by numbers, and along with someone like Kennedy it seems to flow unchanged from an origin you’d never be able to find by simply re-tracing his steps. 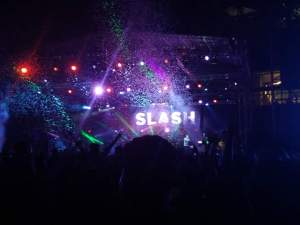 Which is kind of what makes the live and studio work of the Slash/Kennedy partnership so interesting:  Slash, as part of both Guns N’ Roses and Velvet Revolver, paired with Myles Kennedy of Alter Bridge (Creed minus troubled frontman Scott Stapp) boast resumes featuring work in some of the most high profile rock acts of the last thirty years.

That type of history breeds expectation.

But the music Slash has created with Kennedy and The Conspirators sounds nothing like that of their previous acts.  Sure, Slash’s sound/tone is unique enough that you recognize it immediately.  And obviously, on stage, Kennedy is covering the vocal parts of both Axl Rose and Scott Weiland at times but he somehow manages to pull it off as Myles Kennedy without ever aping either of the two, creating in the process a unique take on a wide scope of storied rock songs.

And what’s more?  The band looks like it’s having as much fun as the fans.

Stage presence is something that can’t be taught, and nowhere is that more evident than this show. Slash and just got it, and whatever “it” is, it’s clearly something he was born with, something he can flip on and instantly deliver a phenomenal performance. The power of Slash as a performer doesn’t stem from his over-the-top rock star persona, but rather the allure of the shy kid who hides behind his sunglasses and hair and just wants to play rock and roll, venturing only reluctantly into the glaring lights of the stage. While he’s without a doubt a can’t-miss live act, you get the impression that Slash would be just as happy in his bedroom playing to no one at all, and that’s what makes him one of the special ones. 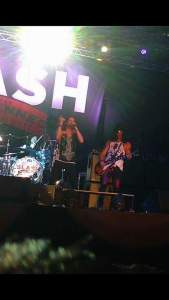 As Slash lazily strummed a few chords before leading the band in “Paradise City,” it was hard not to think about how nice it is that some things just don’t change. That’s not to say Slash hasn’t evolved as an artist, and certainly his supporting cast is different, but hearing him play those notes, top hat in place and a slight grin belying the stoic expression on his face, all feels right with the world. For those two hours, we all, all from different part of the country, different professions, different mindsets, were one, we belonged, in a unity of our own, in a trance of our own, all together.

Two hours of travel in Mumbai, One best friend and Music + Memories to last a lifetime.

That feeling can’t be put into words, how much ever I try. One of my friends asked me after the show, how do I feel and I couldn’t put that feeling into words. My head was filled with the music, still lingering, after 2 days and my heart was full of wonder, that I was there. And a part of me still can’t believe it. The whole thing reminds me of this song lyrics,

I can see it in your eyes, I can feel it in my bones; from the moment you walked away, turned your back on yesterday. I can hear it in your voice, I still feel it in my heart; for a moment, we were something more.