No man is an island, John Donne said. To be human is to bond, and to bond is to share — happiness and the plenty, but also pain and exhaustion and desperation. We are all at the mercy of the people we love, whatever misfortunes they meet or bring upon themselves.

Nothing about being an addict is easy. Absolutely nothing about being with an addict is easy by a long shot. How do parents who try so hard to spread their arms as far and wide as humanly possible to keep things together, come to terms with some things just not being in their control? Beautiful boy is a drawn-out tale of a parent who has to watch his son descent into addiction. A painful reminder to the fact that you can love someone, but you try as you may, you can’t fix them. A reminder my parents have had about me, on more than one counts.

Beautiful Boy is based on two memoirs by Rolling Stone journalist David Sheff’s Beautiful Boy: A Father’s Journey Through His Son’s Addiction and his son Nic’s Tweak: Growing Up on Methamphetamines. Steve Carell plays David as a deeply loving but control freak of a man who starts to realize that he’s being held hostage, and there’s nothing he can do about it. He’s being taken over inch by inch with an anxiety of knowing that his son could die at any moment, and he cannot understand why. Carell pulls this off. He is urgent, imploring, silently haunted. Timothee Chalamet as Nic embodies the title Beautiful in a tender, slow burn. He is a doting elder brother one minute and a reluctant addict the next. He is effortless.

Addiction is a tricky phenomenon to depict on screen because it’s such an insidious, internal disease. What we often end up encountering is the same sorts of manifestations of the damage it can cause, both to the abuser and to the people who love that person, resulting in cinematic clichés.

Told in an often intriguing, often frustrating time-jumping format, Beautiful Boy has a gauzy detachment to its treatment which makes the tale harrowing; but only observed, never felt. Maybe these wispy memories are meant to reflect the characters’ inner state of chaos but it is almost too pretty in a deliberately artful way. It rests upon the shoulders of these two unquestionably fine actors. The story does not emerge as compelling or convincing, but it does its job.

There’s one thing this movie gets right: Addiction is a disease, not a moral failing, and it is a battle fought one day at a time. Fighting — not controlling and not curing. Nic Sheff went from sharing a joint with his father to become a full-fledged crystal meth addict. A child of divorce, on most days he is stable and happy Bukowski reading, Nirvana-loving teenager who responds to the rush of crystal meth because, in his words, it turns his world from black-and-white to Technicolor. Standing in front of a rehab group, he says, quite simply, that it’s the best feeling he’d ever known, so he didn’t want to stop. 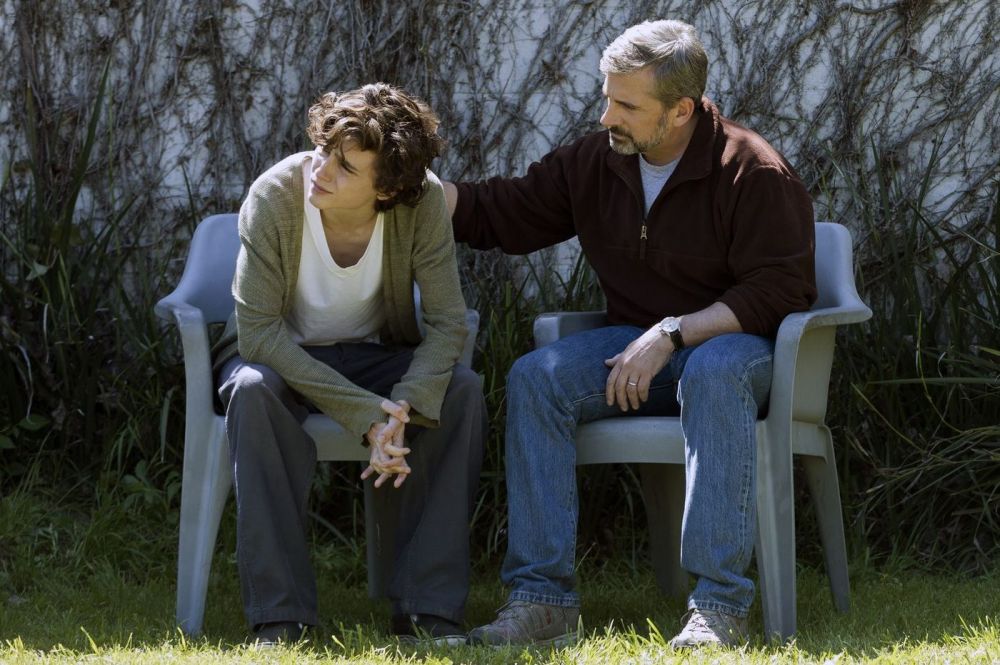 Everyone involved in Nic’s life wants to do the right thing for him, but there is no magic cure. The repeated rehab is hard and painful and doesn’t last long, and Nic would genuinely try, before not wanting to go anymore.  David lives in fear that Nic will relapse constantly watching for signs of an impending episode.

As much as this movie is about addiction, it is in most parts an oblique cautionary tale about parents projecting their egos, identities, and expectations on children whose journeys will always be their own, for better or worst-of-the-worse. David loves his son more than anything, and the film keeps flashing back to his memories of Nic when he was younger. It’s his way of asking: Where did I do wrong? The movie tells the story of David’s road to accepting that he didn’t go wrong; he didn’t cause any of this. It just happened. Despite his intelligence and protective impulses, he’s not in charge.

The movies don’t show us much that we haven’t seen before in movies, but what it does show is utter helplessness. A parent’s greatest fear might be that of being powerless to save their child from disease. Addiction to crystal meth means your child’s brain is on fire, chasing a high that will never match that first time but which doesn’t stop the chase. The spiral of trying to save an addict from themselves is entirely authentic. There’s no cut corners or fake sentimental beats, no fraudulent uplift factor. Rehab leads to a halfway house leads to another relapse. In an especially desperate parental gesture, David as the last resort himself tries some, to understand what his son gets out of this high. But he cannot understand. There’s hope, and then there isn’t, and then there’s hope again.

At it’s best, Beautiful boy is sobering. You don’t even have to be a parent to connect with the heartbreak and horror of watching David read through his son’s journal. He slowly realizes just how the insides of his son’s head must look like.

It’s a movie about characters who are stuck and can’t move forward because of addiction, so the movie itself can’t move forward. We’re in the muck with David and Nic, and while our heart breaks for them, we also don’t have any answers.

While the film lacks narrative momentum, its heart is in the right place. The narrative around addiction almost reminded me of living with someone with a mental illness. I remember being sick, I remember being depressed. I remember my parents and my sisters not wanting to see photos from those days. They do not want to live through seeing me that way again. As hard as it is for me, it was equally hard for them.  Reminiscent of Mira T Lee’s debut book, Everything Here Is Beautiful, this is one of those few stories which tries to humanize a disease, turns the camera eye to not only the patient. But also the caregivers. The tumult of loving someone with an addiction can exhaust even the most caring person.